Having insomnia can really be quite annoying. For mature athletes, you can expect to feel very tired in the morning. Aside from that, it also affects your reflexes, energy levels, and more importantly, your brain function.

Good thing there are sleep remedies that you can try to help you sleep better at night. One of them is Doc Parsley’s Sleep Remedy.

Sleep Remedy: What Is It?

Doc Parsley’s Sleep Remedy is basically an all natural sleep aid designed to improve the quality and duration of sleep you’re receiving every night. It is created by Dr. Kirk Parsley who is a former Navy Seal. This supplement is said to help you replenish vital nutrients and fight sleep disruptors that can cause you stress. 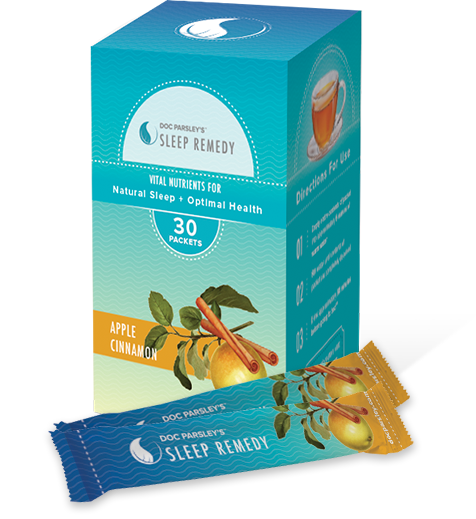 Carefully formulated to avoid the negative side effects caused by conventional sleeping pills, Doc Parsley’s Sleep Remedy is made up of natural ingredients that include L-Trytophan, GABA (as phGABA), 5-Hydroxytrytophan, melatonin, xylitol, and citric acid. Designed for daily use, Doc Parsley claims that the Sleep Remedy should not make you feel groggy or drowsy.

Each packet of Doc Parsley’s Sleep Remedy contains only five calories. The ingredients are all natural so they won’t force or trick your body into sleeping. It is simply designed to replenish nutrients such as vitamin D3 and magnesium, which are necessary for the body to produce the sleep hormone melatonin. Also, the nutrients Sleep Remedy contains are already found inside the human body, so there is little to no risk of allergies and other adverse reactions.

Sleep Remedy is also suitable for parents who need to get up in the middle of the night to tend to their babies. Many conventional sleep aides render the user unconscious, thus, making it very difficult or impossible for them to wake up. However, since Sleep Remedy is simply designed to help your body create normal, restful sleep, those who take the supplement are able to wake up easily from changes in their environment.

While Doc Parsley’s Sleep Remedy is safe for everyday use, taking it after drinking excessive amounts of alcohol is not advised. However, it’s okay to take this supplement and drink alcohol as long as you consume the latter in moderation (about one to two drinks) and balance it by drinking more water.

The product is also not recommended for people below 18 years old as it hasn’t been tested for child use. Parents are advised to keep Sleep Remedy away from children.

What Customers are Saying about Sleep Remedy

Doc Parsley’s Sleep Remedy received positive reviews from many customers. Some of them reported experiencing deeper and more restful sleep without feeling like they’ve been completely “knocked out.” The supplement is also endorsed by Robb Wolf, one of the leading personalities in the Paleo movement.

Are You Guilty of Chronic Cardio? Myth or Fact

Many mature athletes believe that doing cardio is the key to being healthy. Because cardio exercises … END_OF_DOCUMENT_TOKEN_TO_BE_REPLACED

Chocolate Milk as a Post-Workout Drink? Why Not!

When we say "chocolate milk," it brings images of our childhood. After all, it's quite common for … END_OF_DOCUMENT_TOKEN_TO_BE_REPLACED

How to Solve Muscle Cramping

Muscle cramps and spasms are very annoying. One moment you’re fine and enjoying your life and the … END_OF_DOCUMENT_TOKEN_TO_BE_REPLACED

We Have Your Back

Custom Clinic HQ Has Your Back in These Trying Times The United States is in the midst of a period of unprecedented uncertainty. As health care prices continue to soar and as we face changes and a possible instability, it is understandable that many of us are worried what will happen if we or our loved ones will require medical attention. Amid this bleak scenario, what can patients and physicians do to avoid getting abused by a medical system that prioritizes politics instead of the health and well-being of the citizens? The answer is simple: not doing what they have done for decades, … END_OF_DOCUMENT_TOKEN_TO_BE_REPLACED